What Happened to Flight 77's Passengers?

Extraordinary claims demand extraordinary evidence. Take, for example, the claim that one or more passengers on Flight 77, with the help of the U.S. Government, faked their deaths on September 11, 2001? Let’s start with what we know. That would require a high degree of evidence because accepting this claim would require some changes within our view of an event that affects us today.
Let’s separate the events of September 11 into causes and results. In the minds of most Americans, the results of 9/11 are beyond question. Around 3,000 people died (more or less), three buildings were destroyed, one other building—the Pentagon—was damaged, and three commercial airliners are no longer in service, at least not under the same call signs.
Causes are another matter. Of the hundreds, if not thousands, of events (apart from what was then the usual routine) causing 9/11, not one of them has been honestly reported by the 9/11 Commission. Not one of them actually happened.
Let’s look at only two of them. Flight 77 was supposedly hijacked by Muslims shouting Hollywood-style “Islamic extremist” slogans. The truth is, the flight manifest revealed that there were no Arabs or passengers with Muslim-sounding names on Flight 77. (Click here.) (Note: Since then, efforts have been made to indicate Muslim-sounding names on Flight 77 even though they weren’t on the manifest.)
Secondly, Flight 77 supposedly crashed into the Pentagon. It has been proven beyond any reasonable doubt that the Pentagon was hit by a missile and not by an airliner. (Click here and here.)
That brings us to an uncomfortable question: If Flight 77 didn’t crash into the Pentagon, where is it now, and where are the passengers? For years, I had supposed that they probably were murdered and their bodies hidden where they’d never be found.
Believing that Dick Cheney, Halliburton, Blackwater, and others would do something like that must sound crazy to some people. It would be as crazy as supposing that they had deliberately lied about Iraq in order to get us into (for them) a highly profitable war that, incidentally, claimed the lives of over a million civilians, killed thousands of American servicemen, and ruined the emotional health of tens of thousands of other servicemen and their families.
In the pages of the Vatic Project, I ran across an article that suggested that one of the passengers, Barbara Kay Bracher Olson (attorney at law), has resurfaced as Lady Evelyn Booth Olson, attorney at law. 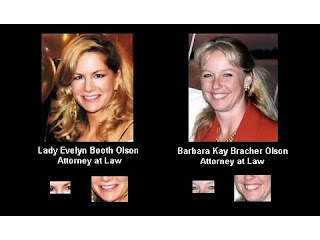 The photos above were posted by the Vatic Project. I used Photoshop to compare them.
First, I matched them for size so that one could be layered over the other. Then, to minimize color distraction, rendered them to black and white.
By changing the layer order (one over the other, then the other over the one), I could test each finding against the other. I reduced the opacity of the top layer to 50% so I could see the bottom layer photo beneath the upper one.
I then aligned the eyes. This allowed me to see how the rest of the faces aligned. I was struck by the fact that both women had unusually wide-set eyes; that is, set far apart. Lady’s eyes were wider than Barbara’s but that’s not surprising, since Barbara is flashing a fuller smile. The eyes still suggest differences that could have been due to plastic surgery.
The jaw lines on the two women, from the right temple to the left jaw, line up perfectly. So do the lengths of their necks. Below, take a look at how well the two faces line up. In this photo, Barbara’s face is superimposed over Lady’s and set at 50% opacity. 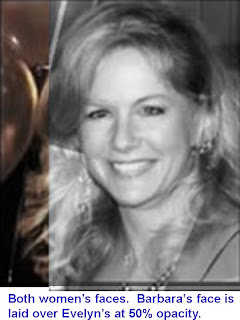 I took the comparison a step further by cutting and pasting each woman’s eyes and mouth over the others eyes and mouth with no change in opacity. I wanted to compare bone structures and underlying muscle tissue. 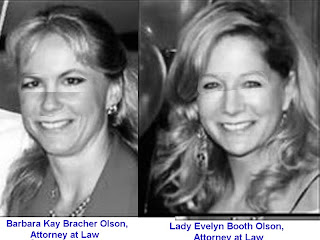 On the left, Barbara has Lady’s mouth and eyes; Lady has Barbara’s mouth and eyes. Look at the bone structure extending from the eyebrows to the base of the nose in both photos. You’ll see one continuous line.
When I superimposed Lady’s eyes over Barbara’s, I cut off half of the left eyebrow. Look at Barbara’s left eyebrow. Lady’s are a little thinner, but you can scarcely tell where Barbara’s eyebrow ends and Lady’s begins.
The fleshy part of Lady’s nose (the cartilage) is a little broader than that of Barbara’s, but the bone structures line up perfectly.
When I switched mouths, I included the nasal-labial folds (the folds extending from the corners of the mouth to the sides of the nose). The nasal-labial folds line up perfectly.
How difficult is it to line up photos in this manner? I’ve been doing this for about five years, and this is only the second time I’ve found that close a match between one photo and another—any photos. I haven’t been able to match any photo of me with any other photo of me. There are too many differences in expression, pose, tilt of the head, the photographers, and so on. 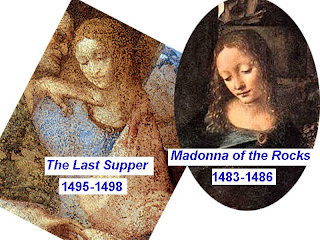 The only other match I’d ever found was between the face of Saint John in Da Vinci’s Last Supper and that of the Virgin Mary in Da Vinci’s Madonna of the Rock(a.k.a. Virgin of the Rocks, painted several years earlier. I concluded from that that Da Vinci didn’t use a live model for Saint John’s face; he used his drawings of the model he’d used in Madonna of the Rocks. No match-up could otherwise have been the perfect match I saw between the two faces.
There’s one more objection to the theory that Barbara Olson and Lady Olson are the same person. Skeptics claim that Lady Evelyn Booth had a history that pre-dated 9/11. After a diligent search, I found only one indication that she even existed prior to December 2001. Records indicate that, in 1988, someone by that name was licensed to practice law in New York, and she was said to have practiced law for 21 years. (Click here.) The telephone number listed as hers, (703) 389-2842, was for an address in Vienna, Virginia, a few miles from CIA Headquarters in McLean, Virginia. (Click here.) During the early 1990’s, Barbara Bracher (later Barbara Olson) also lived in McLean. (Click here.)
Both Ted Olson and Barbara Olson were big neoconservative players. Ted was a solicitor general appointed by George W. Bush after Olson had successfully argued Bush's 2000 election case before the Supreme Court. (Click here.) Barbara was a neoconservative writer and commentator as well as a lawyer for neoconservative causes. They were both faithful players on the Bush/Cheney team. If you need further convincing as to Ted Olson's credentials, take a look at who was among the wedding guests when he married Lady Evelyn Booth. (Click here.)
Now go back to the question I asked at the beginning of this article: If Flight 77 didn’t crash into the Pentagon, where is it now, and where are the passengers? At least one of the passengers may be alive, well, and prospering.