Boundary Conditions for the 9/11 Hijackers, Part 1: An Overview

Every article about the qualifications of the September 11 hijackers I’ve ever seen has been an attempt to answer the question, “Could they have done everything they were accused of doing?” In this article, I take the position of a strategist and ask, “How could anyone with their lack of qualifications have been trusted to do it?” In the process of developing a successful strategy, the strategist always considers the boundary conditions.  Boundary conditions are conditions that must be present in order for a strategy to become successful.
If, for example, you wanted to make lemonade, you'd need water, lemon juice, a sweetener, a container, and a means of mixing the ingredients.  If you lacked even one of those conditions, you'd have to alter your plans or abandon them altogether.  When plans for the September 11, 2001, terror attacks were being formulated, this principle could not have been ignored.
In this four-part series, we'll examine the boundary conditions for just one aspect of the 9/11 terror attacks: the hijackers themselves.  What were the boundary conditions for how the hijackers were recruited?  What qualifications did they have when they were recruited?  How were they trained to meet the boundary conditions necessary for carrying out their respective tasks?  Finally, did they in fact meet those boundary conditions?
(Except where otherwise noted, most of the information for this articles came from 9/11 Commission Report, Chapter 7 or from Wikipedia articles on 9/11 or the biographies of the alleged hijackers.  I've chosen not to reference specifications for planes, tour buses, or Volkswagens.)
Discussion of the pilot hijackers' qualifications, can be confusing because only a small minority of the people on Earth are pilots. Fewer still are commercial airline pilots. As such, we have little frame of reference for comprehending what the alleged 9/11 hijackers were said to have done. It’s like the saying, “One death is a tragedy; a million is a statistic.” For that reason, let me start with an analogy that should make this mind-boggling question more manageable. 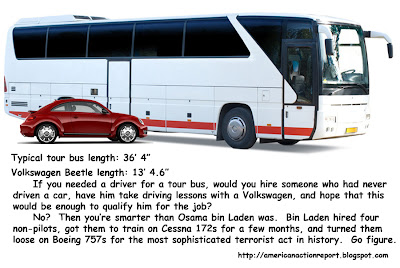 Suppose you were starting a tour guide service to be officially launched in less than two years. The tour bus will need a driver. Whom would you hire? Would you hire someone who has never been behind the steering wheel of a car and hope that, within two years, he’d be skillful enough to operate a tour bus?  If the answer to that question is, “Yes,” how would you train him to operate a tour bus—by sending him to a driving school to practice with a Volkswagen?
Now put yourself in the position of Osama bin Laden, the supposed mastermind of the 9/11 conspiracy. You’re sitting in a cave in Afghanistan, hunched over your laptop, planning the most sophisticated terrorist act in history.
It’s not an easy feat, especially considering the distractions. The most skillful intelligence agency the world has ever known, the CIA, is looking everywhere for you. Luckily for you, CIA agents never consider that, since you regularly need dialysis treatment, they could be monitoring area hospitals that are properly equipped to perform dialysis treatment. Meanwhile, a CNN reporter just saunters into your cave, sees you concentrating on your work (with knitted eyebrows and tongue sticking out, no doubt) and says, “Whatcha doin’?” You give him a scoop, send him on his way without disemboweling him, and go back to your laptop. Hmm, you think, who would make good pilots for a Boeing 757? Would you pick four guys, none of whom has ever sat at the controls of an airplane—not even a Cessna? Would you have them trained exclusively on light aircraft and flight simulators for light aircraft?  Then would you just hope for the best?  Is that how you would plan the most complex terrorist operation in history?
Who would be suitable as muscle hijackers?  Would you have chosen scrawny, boyish-looking men with an average age of 22, most of whose heights were in the range of 5' 5" to 5'7", and who spoke no English?  Would you have let them wait until they'd arrived in the United States to begin their language training and weight training?
In the second article of this series, we’ll examine the pilot hijackers—that is, the hijackers who were given responsibility for flying the Boeing 757s. In the third article, we’ll examine the muscle hijackers—the ones whose job was to cow the passengers and flight crew into submission. In the fourth and final article in this series, we’ll look at some post-9/11 events regarding the hijackers.
Part 2: Boundary Conditions for the Pilot Hijackers
Part 3: Boundary Conditions for the Muscle Hijackers
Part 4: Aftermath
Other September 11, 2001, articles in this blog
Posted by Paradigmaclast at 3:01 PM